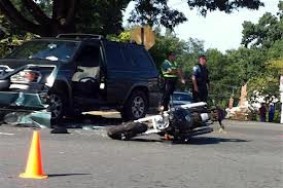 I've been an avid biker for 40 years and I've been an motorcycle accident attorney for 25 of those years.  Let my years of experience as an attorney and fellow biker work for you in your hunt for justice.

Motorcyclists face additional dangers on the road, including each other.  When riding in groups, it is not uncommon for drivers to collide with one another when attempting to take evasive action due to the actions of an automobile.  These situations can certainly complicate determining who was at fault.

Colliding with fixed or stationary objects on or adjacent to the roadway accounts for nearly 25% of motorcyclist deaths.  Due to the smaller size and less stable nature of the motorcycle, potholes, dead animals, slick pavement conditions, uneven heights between lanes, and other irregularities or unexpected objects in the road pose a serious safety threat to motorcycles.  Determining liability in such situations can be difficult; however, prompt crash scene investigation can result in liability being established against the responsible party or parties.

High performance motorcycles account for a disproportionate number of motorcycle accidents.  And riders of such high performance motorcycles seem to receive unfair treatment from the insurance industry.  Furthermore, due in part to loud exhausts and smaller profiles, witnesses often times make unsupportable claims to investigating officers regarding estimated speeds prior to an accident’s occurrence.  Once again, thorough crash scene investigation is crucial to establishing liability in such circumstances.